A report on the Dave Dargie Collection. Written by Dave Dargie. Visiting Professor at the International Library of African Music, 2018. 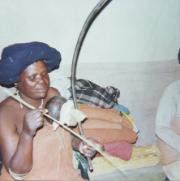 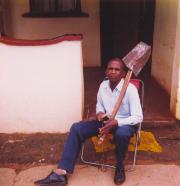 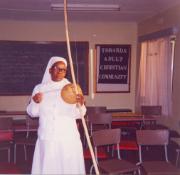 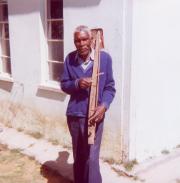 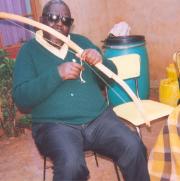 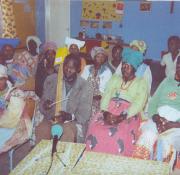 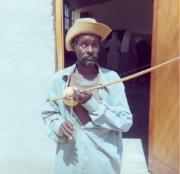 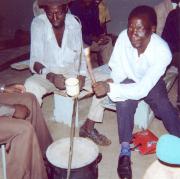 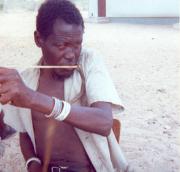 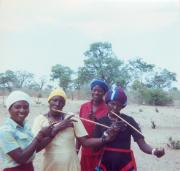 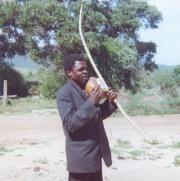 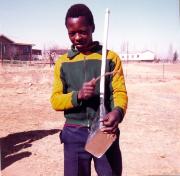 Background to the Collection.

From the beginning of 1979 to mid-1989 I worked as an ethnomusicologist for the Catholic Lumko Pastoral Institute, situated until 1985 near Lady Frere in the deep rural amaXhosa area of the Eastern Cape.  I travelled the length and breadth of South Africa, and also in Namibia, Swaziland, Botswana and Lesotho, conducting workshops at which local church members composed songs for use in church services.  Having been made painfully aware by Andrew Tracey of the ILAM of the damage done to traditional music by missionary activities, I set my goal at trying to bring traditional musical styles into the church.  In some areas the missionaries had turned the attitudes of their converts against the traditions and customs of their own people.  In those areas my work was not easy, but in others the converts still lived close to the traditional way, and the missionaries often had a higher regard for rhythmic African music than for the dreary mission hymns.  Many missionaries were extremely helpful in helping me to find and record traditional musicians.  The most helpful of all was Benedictine Brother Clement Sithole, himself a traditional musician, player of the Zulu umakhweyane musical bow and a composer.

My goals were to promote the production of truly African church music, as far as possible in traditional styles, and then to record as much traditional music as possible, with the aim of filling in the gaps left by other and distinguished musicologists in the documentation of the music of the region.  South Africa had not received as much attention as countries further north, and the music of the amaXhosa, the people of the area where I was born, had been relatively ignored, apart from some recordings made by Hugh Tracey in the 1950s.  I had the great fortune to find an area of wonderful preservation of traditional amaXhosa music on our doorstep at Lumko, including the first documentation of overtone singing in traditional African music.  By 1989 I had recorded music of many people of the region, making a special attempt at recording the musical bows.  Not only is bow music most attractive, it has also provided the theoretical basis for the music of many people.  I was fortunate to record a number of other musical instruments of the region, instruments which, like the bows, are either severely endangered or already extinct.

In 1996 I brought all my original recordings to ILAM, as I have continued to do with all the recordings I have made since then.  With Prof. Diane Thram as director, ILAM undertook to digitise and so preserve all my recordings.  In 2000 I had already begun to put my recordings onto CD (and later DVD), and to my delight ILAM took over these CDs, DVDs and the handbooks which I had written (and still writing) to document them.  ILAM called this series the “Dave Dargie Collection”.  Everything in the “Collection” may be obtained from ILAM, and also the hundreds of other recordings which have not yet been organised onto CDs or DVDs.  All my digitised recordings may be obtained from ILAM through the internet.  It will readily be appreciated how pleased I am that the musical treasures entrusted to me by so many people will be preserved for the future as part of southern Africa’s musical heritage, available to everyone and, I very much hope, giving the descendants of those musicians the opportunity to learn and perform the songs and instruments – and overtone singing – which either have already fallen into disuse or are seriously endangered, as is so much of the culture of the region.

Regarding the “Collection”, naturally the focuses of my work had a direct influence on what I recorded.  My starting point with Lumko was to promote the composition of new church music, as far as possible in true African styles, by musically inclined church members.  I needed to find ways to guide and inspire participants in these workshops, so early on I worked at developing methods of group composition, in which participants could work as a group to produce new songs.  I used ways by which they could bring themselves from speaking to singing, because words in the languages of the people in my workshops were tonal.  A crucial point in this was the workshop at Bunya in Kavango in 1979.  There are audio and video recordings in the “Collection” demonstrating the process.  I was given the task of bringing marimba xylophones into church music, because missionary converts had been set against the use of drums. Xylophones provided an excellent way to bring rhythmic music into church.  We tuned the xylophones so that they could play both the Xhosa scale and the diatonic scale used in nearly all previously existing Xhosa church music.  I learned to play the instruments and then to teach others to play them.  I adapted songs to use with marimbas.  Before I started with Lumko I developed a love of bow music from the Tracey recordings at ILAM.  The bows played a huge role in the development of the traditional music of southern Africa.  Wherever I went I tried to record bow music.  I knew about the music of Ntsikana before I began with Lumko.  I went hunting for survivals of it – and I found his Great Song used as an uhadi bow song in different ways.  Whenever I could, I encouraged bow players to help with the composition of new church songs. And I went so far as to compose some myself.  The next step was to adapt Ntsikana’s songs – and my own – to use with marimbas.  It was a wonderful time.  I felt as if blown along by what was happening without myself doing much about it.

It was very similar with my research into amaXhosa traditional music.  First, and most unexpectedly, I found a marvellous preservation of ancient music all around Lumko.  I found overtone singing.  I drove myself to try and crack the incredibly complex uses of rhythm in the area.  I learned to feel the cross-rhythms. I worked to bring rhythms into marimba playing which could prove worthy of the experts in rhythm with whom I was working.  Nofinishi Dywili, the uhadi bow master and song leader of Ngqoko, Nowayilethi Mbizweni, the master of umngqokolo overtone singing – may they be remembered for ever (if possible) because of the recordings they gave me, and the same with all those talented and generous musicians with whom I had the great honour to work – all unexpectedly.  Until I agreed to tackle the church music project I thought my calling was to be a composer.  I feel only deep gratitude that instead I was given the task to turn hundreds of others into composers, and to have the chance to preserve their work and the work of many others.  These and other factors influenced my recording work. I long for others to derive the same enthusiasms from the recordings which drove me to make them.  And I feel everlasting gratitude to ILAM for enabling my work to be preserved, for it is not in fact my work.  I was and am merely a catalyst who found the great happiness of working for other, highly talented people.

Here follows a list of what is in the “Dave Dargie Collection”.  Many of the CDs and DVDs have accompanying handbooks, some have small booklets inserted in the disc case, others have only inserted leaflets.  In addition to information, photos, and so on, some handbooks are song books with scores. Some have analytical score transcriptions.  See also the bibliography at the end of the report for further written material by the author, relevant to the “Collection”.

THE MATERIALS IN THE “COLLECTION”.

To date the “Collection” contains 48 audio CDs, one CD ROM, 15 DVDs and 25 handbooks.  I did more work on Xhosa music than on music in other languages, as is reflected in the lists below.

The audio CDs and the DVDs in the collection have recordings of five Xhosa musical bows, umngqokolo overtone singing, songs and dances of all categories, including the use of drums.  The CDs cover the period from 1979 to 2011, the DVDs, 1985-1998.  Those accompanied by handbooks are indicated (H).

One DVD is designed as an introduction to isiXhosa music (“Xhosa Music Introduced by Dave Dargie”) and one CD with accompanying handbook is similarly designed with selected recordings of instruments, overtone singing and techniques (“Nguwe lo!”) There are 9 handbooks accompanying the CD recordings and 4 with the DVDs.  There is a further CD on isiXhosa pronunciation (for singers) and a further handbook on amaXhosa music terminology.

NAMIBIA: One CD of church compositions, many in traditional styles: “Missa Namibia”; 2 CDs of the Bunya Composition Workshop of 1979, illustrating working techniques and with the compositions, plus handbook with information and song scores; one CD “Musical Bows of Namibia”; plus other recordings on the compilation discs.  DVD: “Church Music in Namibia 1988”.  Both audio and video material from Namibia, are on the compilations discs (see below).

TSWANA:   2 DVDs: “Tswana Music – Traditional and (Neo-)Church”; “Ga-Rankuwa Church Music Festival 1989”. Other seTswana material is on the DVD “Composing with Traditional Musicians” (compilation DVD – see below), and on the compilation CDs.

“Magical Musical Bows”: various peoples; examples of all 21 musical bows recorded by the author in South Africa and neighbours; with handbook.

“Dave Dargie Photo Display”: CD ROM with 161 photos, 4 Music CDs illustrating the photos, one guide handbook and one handbook on musical instruments of the region.

COMPILATION DVD: “Composing with Traditional Musicians”: The DVD contains videos made at three composition workshops run by D. Dargie, at Andara (Kavango – thiMbukushu), with thishandzhi mibra and drums (1988), at Mahalapye, Botswana (seTswana) with segankuru bow (1989) and at Mooketsie nr Tzaneen, with xitende bow (1988).

I conducted scores of church music composition workshops in the period 1977-1989.  I also introduced the use of marimbas into South Africa, distributed and taught marimba playing in many places from 1979 to the present.  Other workshops conducted up to the present are for teaching and learning African songs, drumming and dancing.  Materials developed for these purposes and reflecting this work are as follows:

Audio CDs: African Church Music: “Sing an African Song” (H): CD of selected songs for introducing learners to African music, with handbook/songbook; “African Sunday Marimba Mass” and “Lumko Marimba Mass” (H): 2 CDs of church marimba songs with accompanying handbook/song book; “Xhosa Pronunciation for Singers” (mentioned also above), to help singers learning the new Xhosa church songs.  Musical bows: “Make and Play your own Musical Bow”: CD (H) with handbook/music exercises for learning to make and play the umqangi percussion mouth bow and the uhadi calabash bow; 2 CD and handbook set “Bunya Workshop 1979 Shelf Recordings and Compositions” (ruKwangali language, Kavango): one CD with recordings made during the group composition process at a key early workshop of the author, the other CD with the finished compositions, description, information etc plus song scores in the handbook.

DVDs: “Composing with Traditional Musicians” (see under “Compilation DVDs” above): video recordings demonstrate the methods of composing new songs by group composition and with the help of traditional instrumentalists.  Marimba Playing: “The Lumko Marimbas 1979-2017”: video recordings of the early days of the “Lumko” marimbas, with handbook with information, music scores etc.  “Xhosa Music Introduced by Dave Dargie”: DVD designed for teaching/learning traditional Xhosa music, with recordings of traditional music and explanations/demonstrations by the author in separate titles, including demonstrations of musical bows uhadi and umrhubhe/umqangi.

References and Bibliography of Materials by D. Dargie relevant to the “Collection”.

Dargie 1988: Xhosa Music, its techniques and instruments, with a collection of songs: David Philip: Cape Town.

The Work behind the Collection.

There are a number of relevant papers by the author in the Papers Presented at the Symposiums on Ethnomusicology, published by ILAM.  See also “Bow Songs as Carriers of Heritage” in First International Bow Music Conference Proceedings, ILAM, 2017, 1-14.